From 15 to 21 April 2018, selected students of the National Science Challenge (NSC) 2017 participated in the Sakura Science High School Programme (SSHP).

Ten students comprising three teams of NSC Grand Finalists and a top scorer from the NSC Preliminary Quiz were among the 30 Malaysian students who participated in SSHP.

Accompanying the students were supervisors from the Academy of Sciences Malaysia (ASM) and the Ministry of Education (MOE).

SSHP is a short-term invitational programme launched in 2014 by Japan Science and Technology Agency (JST), targeted at aspiring young people in Asia and its neighbouring regions.

The SSHP is part of the prizes given to runners-up of the NSC Grand Final 2017, an opportunity provided by one of the strategic partners of NSC, Japan Science and Technology Agency (JST).

Aside from experiencing Japanese culture, activities under the SSHP include visits to various research institutions and universities in Japan, as well as lectures by distinguished scientists.

As part of learning about the history of Japan, participants visited Himeji Castle. Steeped in history, it is the largest and most visited castle in Japan. Himeji Castle was registered in 1993 as one of the first UNESCO World Heritage Sites in the country.

After Himeji Castle, the delegation moved on to visit the National Institute of Technology of Akashi College, where they learnt of the KOSEN Education System, a five-year engineering education system. This education system was established in response to a strong demand from the industrial sector. It has fostered engineers who sustained the high Japanese economic growth at that time.

Established in April 2002, the Disaster Reduction and Human Renovation Institution (DRI) is operated by the Hyogo Earthquake Memorial 21st Century Research Institute. Participants learnt that the mission of DRI is to instill a culture of disaster awareness, enhance local capacity for disaster management, support the development of disaster management policies, and contribute to create civic collaboration on safety and security society.

Participants also attended a lecture conducted by Professor Akira Fujishima, at Tokyo Gakugei University Senior High School. Professor Akira is renowned for his discoveries; most prominent among them is titanium dioxide (TiO2) can split water into oxygen and hydrogen when exposed to light. TiO2 has been instrumental in the development of air and water purification technologies as well as self-cleaning, anti-fogging and anti-staining applications.

At Tokyo Gakugei University Senior High School, the participants also obtained first-hand experience on how the Japanese education system operates and what the school environment is like.

Participants also visited Miraikan, dubbed the Museum of the Future. Here, they listened to a lecture by the Director of Miraikan, Dr Mamoru Mohri. Dr Mohri is also a former NASDA astronaut. The participants of SSHP also visited the Japan Aerospace Exploration Agency (JAXA).

The closing ceremony of SSHP was held at the JST Plaza on 20 April 2018. Ms Lee Zoe Jean from SMJK Perempuan China Pulau Pinang was selected to represent the Malaysian team to deliver a thank you speech as well as to share her findings throughout the study visit. The Malaysian team also performed a song called Rasa Sayang to exhibit the colourful and unique strength of Malaysia as a multi-racial nation. 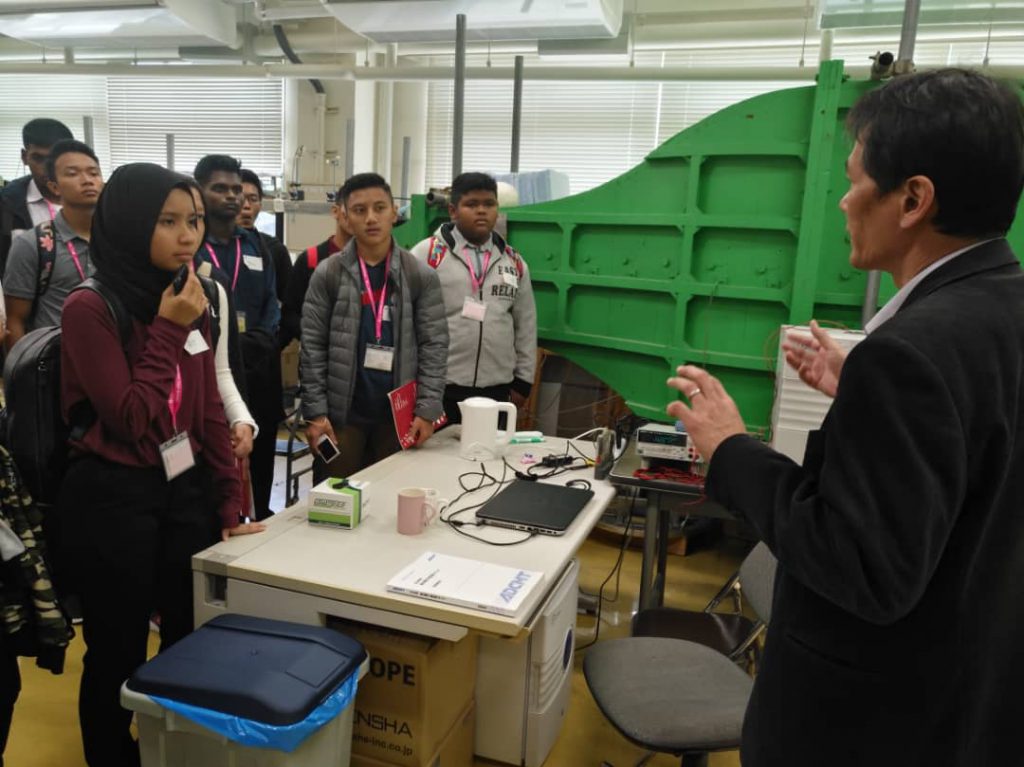